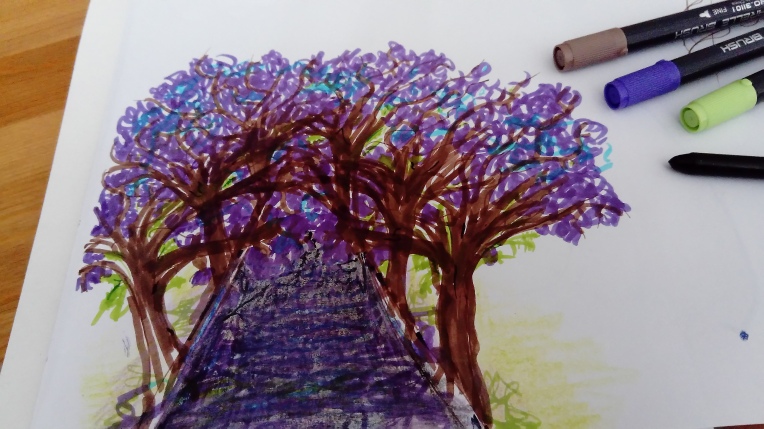 Seeds held in nature’s case
Ready to be free, to accept the wind
And land in a place meant-to-be
Time it takes to grow and bloom
Worth the wait
Soon enough the streets are lined
Multiple friends standing side by side, entwined
A tunnel formed
An invitation to journey through
Look up and see glory
A mural of pure beauty
Purple petals rain down and blanket the ground,
Like snow in a wonderland
Wonderment in this moment
Journey round and repeat again.

A snow day on the second day of spring

An unusual celebration – what will the day bring?

The perfect setting to tell a tale

He set out on a journey this morn

To create a wonderland not of winter but spring

He started with snow butterflies decorated with twigs shaped in rings

He built a snowman – because he wanted to

With sunglasses and a peak cap

The snowman pointed the way to a powdery landscape

But it will do

Then man the castle and protect the grounds

Be prepared for potential snowy battles

Care was taken to make a mound of snow balls

And a great big wall

No battle was had in the end

So he practised his swing hitting snowballs with a baseball bat

A snow day on the second day of spring

What fun it sure did bring

Then snuggle up with a book or two

Telling tales of kings and castles, snowmen and heroes

Cat agrees and springs with ease, landing on her feet

The ball rolled into the pond

It floats around waiting to be found

Cat sees it but its just out of reach

Frog goes and gets the ball

With a splish and a splash he brings it back

He asked Cat to save his kite,

which got stuck in the tree

Now cat is stuck and the branch starts to lean down

Cat will get unstuck with squirrel’s know-how

He guides her along

Until they jump to safety

Cat knows just who they need,

She runs off at lightning speed

Dog will help but can’t climb over

Frog reveals a loose flap in the fence

They bid farwell and return to their spots

A little while later Cat and Dog hear a sound

They hit the ball with the bat

Frog swings the bat and the ball travels far

So far in fact it lands on the roof

They all look up and sigh

Just as Bird flys by

Dad and I went into the garden to play,
It’s full of adventure Owen, Dad said.
Let’s start by looking in the flower bed.
I see lots of roses and buttercups too,
Don’t forget the snail and its trail of goo.
Next we roll around on the grass,
Let’s see how long we can last.
Dad gets tired and stands up straight,
I’ll race you to the wind chime hanging on the gate.
I get there first and smile with glee,
Dad says well done, you are much faster than me.
Now the pond with the swimming fish,
I know Dad, let’s make a wish.
After a grumble in my tummy I say,
I know just what to wish for after all that playing.
Just then I hear Mum saying,
Lunch is ready you two.
I look up at Dad and grin,
I’ll race you, let see who will win.

Come and sit with me Little Bear,

Sit and stare at the starry sky.

Wait a while, be patient

A wonder that that comes at special time of year.

Though it’s different now as you are here.

Sit with me Little Bear,

Sit with me and stare at the starry sky.

The Northern Lights are here.

A welcome warm for Little Bear.

They stop for a moment and stare at you.

Then soar across the sky.

A river of bright, colours delight,

A rainbow at midnight.

Forever more special, because you are here.